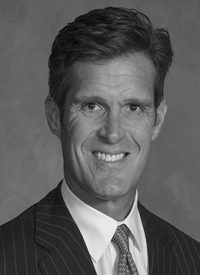 Haag Sherman serves as Chief Executive Officer and Chief Investment Officer of Tectonic Holdings, the parent company of Tectonic Advisors where he also serves as Chief Executive Officer. In addition, Mr. Sherman is Managing Director at Sanders Morris Harris and  Chairman of T Bancshares, Inc. (parent of T Bank, NA, a nationally chartered bank), both affiliates of Tectonic Advisors. Prior thereto, Mr. Sherman co-founded and served in various executive positions (including Chief Executive Officer and Chief Investment Officer) of Salient Partners, LP, a Houston-based investment firm with $17.5 billion in assets at the time. At Salient, Mr. Sherman developed most of Salient’s investment products and co-developed patented software that provided scale to the distribution of Salient’s investment products. Mr. Sherman previously served as an executive officer and partner of The Redstone Companies where he, among other things, managed a private equity portfolio. He practiced corporate law at Akin, Gump, Strauss, Hauer & Feld, LLP and was an auditor at Price Waterhouse, a public accounting firm. Mr. Sherman has served on the Boards of Directors of several non-profits as well as public companies, including: Hilltop Holdings Inc. (NYSE: HTH) and Salient Midstream & MLP Fund (NYSE: SMM), which he co-founded. He has commented and written extensively on public policy and financial matters, including authoring articles for Barron’s and MarketWatch, and the book Shattering Orthodoxies: An Economic and Foreign Policy Blueprint for America (Easton Press, 2008), which reached no. 6 on Amazon’s top Social and Economic Policy Books after publication. Mr. Sherman holds a BBA in accounting and economics (cum laude) from Baylor University and a JD (with honors) from the University of Texas School of Law, where he has also served as an adjunct Professor of Law.